Smorgasbord for your Roses

Want some BEAUTIFUL ROSES?
(Works for Tea Cup roses also) Add these three foods in the soil on a regular basis.

Banana Peels gives your Roses the BOOST of Potassium they need!

Coffee Grounds give your Roses Nitrogen!

(The BEST I have EVER had!)

Let me start by saying, there is a reason for EVERYTHING in this world! Even my yearly craving for a Cadbury Creme Egg! I am not looking for praise or recognition, just a reminder to everyone to Pay it Forward in life <3 ~ Micki

The Cadbury Creme Egg is BY FAR my favorite Candy! There is nothing better then cracking it in half, licking out the creme, and then eating that AMAZING smooth milk chocolate! As a child, my mother made sure my Easter Basket was filled with them. And doing the best I could, I would ration them, eating only one every few days, seeing as I had to wait a year for them to come around again! As I have gotten older my Mom still to this day makes me up an Easter Basket and puts some in for me!

Last night, after a nice Dinner and evening with my husband, we were driving up Highway 41, when suddenly the craving hit me, I had resisted the temptation for the whole Easter Season so far!  Being close to the Kwik Trip by Fox River Shopping Mall, Hubby pulled in. (After twenty years of being together HE KNOWS when my sweet tooth hits, it is in his best interest to fulfill my request)

It was about 11pm, As we were pulling up to the Gas Station, there was a guy walking around the parking lot talking on his cell phone, which at that point, I thought nothing of it. We walked into the gas station, and I made a bee line to the Candy Section, Spotting a whole box of these little Gems. Glancing at the price, $.79, I thought to myself, “Oh My how the price of Candy has gone up in my 40 years of life!”  No hesitation though, I had to have it!

Walking up to counter, standing there was the Parking Lot Cell phone guy at that register next to me, he was talking to the Cashier and talking to someone on his cell phone also. Not trying to be nosey, but hearing, “No, it is not working, I am not sure what to do!” During this time the other Cashier was checking out a lady in front of us. As we stood there, we next hear “It is off of 41.” I still have not put two and two together. It is our turn next to check out, a few more minutes have passed. Behind us we hear him calling someone else, and him say “I can’t leave, they won’t let me.”

At this point two and two is equaling four! Hubby and I both look at each other at the same time. Looking over at the other cashier, My husband asks, “How much does he owe?”  The Cashier says, “$22” as my husband is already handing her his Debit Card. I turned around to the guy who is still on the phone trying to find someone to bring him some money and say to him, “Don’t worry, we got it!”  He literally stood there with shock on his face, then out came “No, you can’t do that.” After a little bit of persuading, he said, “At least give me your cell or address or something so I can send it to you.” I just kept saying “Not a problem, Do not worry about it.”  He keeps saying “Thank You, You have no idea what this means!” Shakes my husbands hand and turns and hugs me, and still as he is walking out the door with us is saying “Thank you and God Bless you both!”

We climb into our SUV, He climbs into his Mini Van and you can still see the shock on his face as he is dialing his cell phone. As we get back on the Highway, Carry and I both look at each other smiling, not saying a thing, Just smiling, as I slowly eat my Cadbury Creme Egg, Enjoying it more then ANY other one I have eaten in my life!

WHAT AN AMAZING FEELING to do something so little, that I know had a huge impact on not only us, but on the guy we helped, the Cashiers who both Thanked us and said it was so kind of us, and the other customers in the Kwik Trip who all stood there with surprised looks on their faces.

I would like to think, at some point, hopefully this guy will be in a situation similar to what just occurred and look back and do the same and Pay it Forward.  That $22.79 Cadbury Creme Egg was the BEST I have ever eaten, worth EVERY CENT!

There are two VERY IMPORTANT things to follow when starting a Garden!

1) Size. ALWAYS start smaller…You can add on! Never make it bigger then you are able to maintain and keep weed free.

2) Find the right location. You need an area that gets a good amount of sunshine through out the day! The More Sunshine the better!

Your first step will be to lay your garden out. I prefer to use Cardboard, (Pizza boxes actually), but you can use newspaper also. Then take a shovel and put a trench around the square you have laid out. Pick up the boxes or newspaper, and dig up the sod within the square. Just enough to bring up the roots of the grass, then lay the boxes back down.

Now it is time to build your box! Make sure you use rot resistant lumbers. I prefer cedar two by six boards and galvanized screws. (Will not rust) Use a level and make sure your box is level or else you will have problems with water pooling.

TIME TO ADD THE DIRT!

Use quality top soil, rotted manure, and compost. Mix it up, level it off, and your garden is ready to go! The GREAT thing about Raised Gardens is that each year you just add a little manure and compost and you are ready to go!  I also like to add some used coffee grounds and crushed up eggs shells to my soil, and my plants LOVE IT!

You can even simmer it in your crock pot with Cherry Coke to make it EXTRA TENDER! No, I have lost not lost my mind! Try it, you do not know what you are missing!

Next time you are making some pulled pork in your Crock Pot, Try adding some Onions and some Cherry Coke. Let it cook on low for AT LEAST eight hours, it will just fall apart! Then, Drain most of the liquid (Keep those yummy onions though), Shred the pork, add your favorite BBQ Sauce and then add a can of cherry pie filling!

Let it all simmer for another hour and you are READY to eat this Deliciousness!

Throw some on a Kaiser roll, and Enjoy!

FORGET the BLEACH! Add some BRIGHT BLUE to your Whites!

Yes you heard me right! Stop using that yellowing, smelly bleach in your wash! ADD a BRIGHT BLUE T-Shirt to your load of Whites! I GUARANTEE your whites will be brighter than they EVER HAVE BEEN!

I will not get all technical, but do you remember your parents and grandparents talking about “bluing?”  It is the same concept! The Blue makes the whites, WHITER! A great example would be when painters are painting a picture, they will add a tint of blue to make their white BRIGHTER, it will intensify the whiteness! When blue is added, white reflects more light.

If you have a smelly/musty odor you need to tackle, Grab a bottle of BLUE Pine Sol and throw in a capful! Works the Same!

TRY IT FOR YOURSELF in a load, you will be AMAZED!

How to save a FORTUNE with Zucchini

Want to save a FORTUNE on your grocery bill EVERY year, and get healthier? PLANT SOME ZUCCHINI! My freezer is full year round! Chopped Zucchini, Shredded Zucchini, Zucchini Boats! Did I mention I have a separate chest freezer JUST FOR Zucchini? It is SUPER easy to grow, does not need a lot of watering, and let me emphasize again HOW MUCH IT WILL SAVE YOU ON YOUR GROCERY BILL!

First, let me explain the benefits of this amazing vegetable! The dietary ﬁber in zucchini helps lower cholesterol, it helps prevent cancer, it is GREAT for prostate health, it is an anti-Inflammatory, it helps prevent heart attack and stroke, it helps lower blood pressure, and it is high in manganese. (Get more details here)

Now let me explain how it is going to help you save on your grocery bill! I add zucchini to pretty much ALL my dishes! I replace half of the ground beef in a recipe with zucchini, I add it to my soups, I even add shredded zucchini to my mashed potatoes & brownies. The great thing about Zucchini is it takes the taste of what you are baking or cooking! You are going to use less meat in your hamburgers, meatloaf, chicken tacos, whatever you are cooking…THROW IT IN!  You can make YUMMY bread with shredded zucchini and even make Zucchini Crisp. (Tastes just like apple crisp) 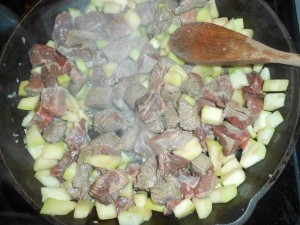 So get out there, buy a packet of Zucchini seeds for $.99 and get your plants growing! That one time $.99 purchase years ago, has saved me thousands over the last few years! (When I clean my zucchini’s I dry some of the seeds and use them the following year)

Do you love Ginger Snaps? Guess what…Your furry friend probably does also! Ginger Snaps are a GREAT Treat for your dog! Ginger is good for them, and GREAT for car sickness also, It soothes their stomach! Our dog gets one Ginger Snap Cookie a day. Everyday I break one into four, and the four times he goes out, he gets a piece. HE LOVES THEM!

I learned this GREAT tip from my Vet on our Dogs last visit. Usually he is VERY picky and will not take a treat, these he gobbled right up to my surprise, so of course I asked what type of treat it was. His assistant said to grab a bag at the dollar store during our next trip and he has been enjoying them ever since!

Keep in mind, SUGAR is not good for them or for their teeth, SO PLEASE make sure you limit the amount you give them. My vet said one a day is fine and the Ginger is beneficial to them.

Does your Fur Baby have Diarrhea? Constipated? Or Upset Stomach? Grab a can of PURE (No spices added) canned pumpkin! I have been doing this for years!

Pumpkins are VERY rich in fiber, along with MANY other benefits. Canned pumpkin is rich in dietary fiber and will absorb any excess water in your dogs intestines within hours! So how does it work for constipation also? It softens your dogs stool, eases his stomach pains, and helps him go. (Think of how fiber works for us)

Dosage: Small dogs get one and a half to two teaspoons of canned pumpkin. Larger dogs give two tablespoons. Most dogs will eat it right out of a bowl and think it is a treat.

Pumpkin is also a good source of Vitamin E, Magnesium, Phosphorus and Potassium.

Disclaimer: As always, Make sure you discuss this with your vet and get their approval. Animals can dehydrate VERY QUICKLY, always seek medical attention for your pet.

Leaving your car out overnight? Mix one part of water to three parts of vinegar and coat the windshield! No Ice or frost build up in the morning! It really is that simple, and saves SO MUCH time not having to scrape!

{ Your info will never be shared because spam stinks }